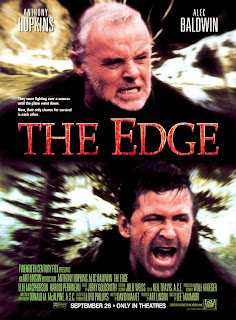 I don't see myself devoting much time to giving reviews on books or movies, but since I had so much fun writing about 127 Hours I thought that I would write a review on another movie I have enjoyed for a while now.

The Edge came out back in the 90's, stars Anothony Hopkins and Alec Baldwin, and takes place in the Alaskan bush. Anthony Hopkins plays Charles Morse, a billionaire who travels to Alaska with his wife in order for her to model in a photo shoot. When Charles and two others go on a plane ride, they crash and find themselves miles from where they told everyone they would be, and are left on their own to fend for themselves in hopes that they will be found.

Instead of continuing to give a plot synopsis, I'll explain why I enjoy this movie so much.

Although everyone knows that Charles is rich because of his ambition and ability to think critically, they all secretly think that he is a joke and that his money buys him everything he needs - except genuine friends. Charles comes across a wilderness survival book near the beginning of the movie, and is seen reading it while his wife does her photo shoot and at other various times. He is able to retain pretty much everything that he reads - which ultimately saves him.

Throughout the movie Charles is able to keep his head on straight, remember the material he read in the survival book, and take on the role of leader in his little group. Once a giant man-eating grizzly bear starts stalking them, the movie gets much more exciting. Both Charles and the antagonist of the movie are left alone to figure out how to take down this huge bear that wants nothing more than to eat them for dinner. At the pinnacle moment of the movie, Charles remembers reading about dead-falls, but realizes that they don't have the time or tools to dig a hole big and deep enough to make one work. So, without giving away what happens in the movie, Charles thinks of a brilliant way to take down the bear. 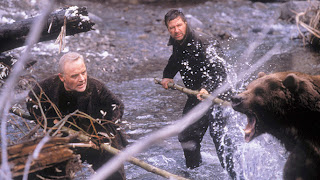 I would definitely recommend this movie to anyone, and would say that it makes my top 10 list for survival movies. I've watched it three or four times, and would feel fine watching it again tonight:) Check out the parental advisory to be aware of why the movie is Rated R.

Favorite quotes from the movie - all of which come from Anthony Hopkins' character Charles:
"What one man can do, another man can do"
"We're all put to the test...but it never comes in the form or at the point we prefer, does it?"
"Most people who die in the woods die of shame"
"Say it! 'I'm gonna kill the bear!!!'"
"Did you know that you can make fire from ice?"


***I've been very busy with school lately, but plan on finally compiling all of the info I have come across over the last three months to write my post about outdoors blogs. It's taking more time than I expected to really look over each blog and come up with a way to rate them. Promise it will be worth the wait though!